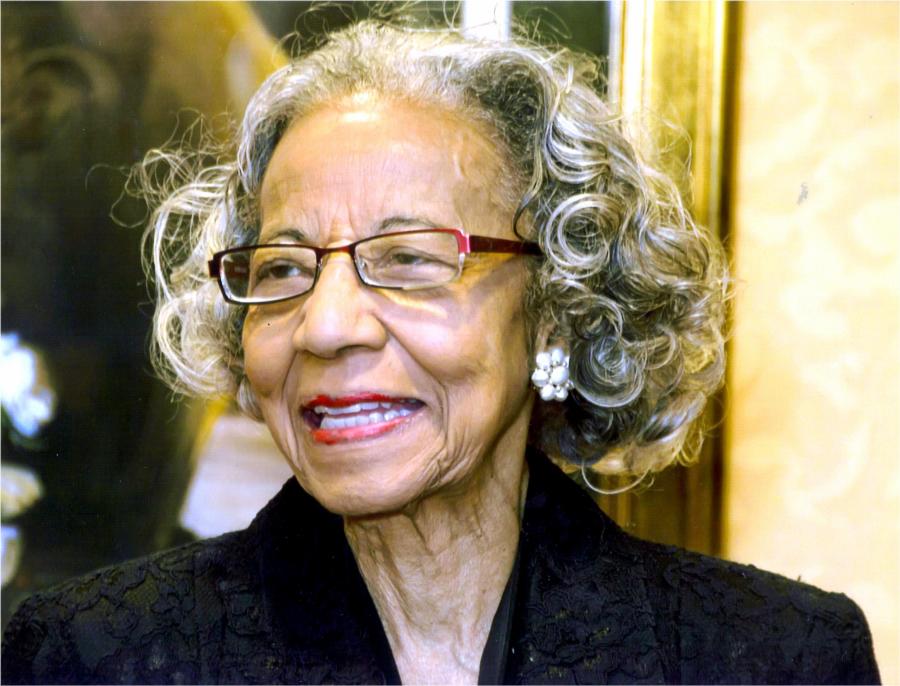 Willie Stevenson Glanton, J.D., an attorney and civic leader, the daughter of the late Ervin Sullivan Stevenson and Willie Ever Parker, transitioned peacefully to be with the Lord on July 6, 2017, at the age of 95.

Mrs. Glanton was a selfless trailblazer who fought tirelessly for women’s rights, equality and social justice. She was the epitome of grace and strength. Born in Hot Springs, Arkansas, she was taught to value education and civic responsibility by her father, who organized the Negro Civic League in Hot Springs, and her mother, a school teacher. By age 10, she had a strong desire to become a lawyer.

After completing her Bachelor’s Degree in Business Education from Tennessee Agricultural and Industrial State College (now Tennessee State University) in Nashville, Mrs. Glanton earned her law degree from the Robert H. Terrell Law School in Washington, DC. There she met her husband, Luther T. Glanton, II, J.D., whom she married in 1951. She was the apple of his eye, and he knew she was the one the moment he laid his eyes on her. They shared a beautiful love and cared for one another until his passing. From this union, they gained a son, Luther T. Glanton, III.

Mrs. Glanton had unconditional love for her son. They enjoyed going to church together, watching TV, having a quiet dinner and in later years, playing with Angus, their beloved dog. Those of us who loved her had to learn to love Angus, whose love was second only to Luther, III. In 1953, after the couple moved to Des Moines, Iowa, Mrs. Glanton became the second African American woman to be admitted to the Iowa Bar. A pioneer in both the legal and political landscapes in Iowa, she was the first African American woman to become an Assistant County Attorney in Polk County.

Mrs. Glanton’s impact on the community was evident in her dedicated involvement through various service organizations. She was a member of Westminster Presbyterian Church. Mrs. Glanton was a founding member of The Des Moines Chapter of the Links, Incorporated in 1957, and the Des Moines Chapter of Jack and Jill of America, Incorporated in November 1962. She was initiated into Delta Sigma Theta Sorority, Incorporated, at Tennessee Agriculture & Industrial State College in 1939.

In 1962, the Glantons were sent by President John F. Kennedy’s administration to Africa and Southeast Asia where she studied legal and civil rights of women. Back in Iowa, she joined the League of Women Voters and became active in Democratic political organizations. Her organizational skills and hard work earned her colleagues’ encouragement to run for office. In 1964, she became the first African American woman elected to the Iowa General Assembly. After completing a term in the Iowa House, Mrs. Glanton continued to focus on civil rights and women’s rights as a lawyer and equal opportunity advocatewith the U.S. Small Business Administration, until her retirement in 1987.

While too many to list, Mrs. Glanton held leadership positions on boards, commissions, councils, in church, and other civic and community organizations. Among the many organizations that benefited from her leadership and service is Des Moines University (DMU). Mrs. Glanton took her husband’s place on the Board, became its Chair in 1999, and served as a Board Member through 2012. In 2004, to honor the Glantons’ leadership, service and commitment to justice and education, DMU established the Luther T. Glanton, Jr. and Willie Stevenson Glanton Fund. A member of “Who’s Who in America,” she was the first woman and first African American to be elected President of the Iowa Chapter, Federal Bar Association (FBA). She represented the FBA in a People-to-People tour of China, Finland and the Soviet Union in 1986.

Her many honors included induction into the Iowa Women’s Hall of Fame in 1986 and the National Bar Association Hall of Fame in 1995; the Legacy Celebration Award for Distinguished Service as an Area and National Officer to The Links, Incorporated, 1993; Young Women’s Resource Center Visionary Woman Award, 1991; Judge Luther T. Glanton Community Service Award for Meritorious Service to the Community at Large, given by Blacks in Government, 1992; 2010 Margaret Brent Award from the American Bar Association; Business Record Woman of Influence, Class of 2008; The Des Moines Register’s Aurora Award, 2013; and Des Moines Magazine’s “Sages over 70” Award, 2011. The Des Moines Register named her one of the 10 “Most Influential Black Iowans of the 20th Century.” In 2011, the Iowa Organization of Woman Attorney’s established the Willie Stevenson Glanton Award in recognition of her pioneering spirit, leadership and service.

She was the consummate hostess and enjoyed entertaining in her home. In 2007, Mrs. Glanton hosted the future first lady, Michelle Obama, as she campaigned for the future president, Barack Obama. In 2010, Mrs. Glanton was part of a small group invited to the White House by President Barack Obama for a celebration of Martin Luther King, Jr. Day.

Mrs. Glanton was soft-spoken, gracious and had a passion to “free up people” which has left an indelible mark on Iowa, and the many she mentored and “mothered” over the years. She enjoyed reading and keeping up with the latest news.

On July 6, 2017, Mrs. Glanton was called home to be with her Heavenly Father. She was preceded in death by her husband, Judge Luther T. Glanton, II; her parents, Ervin Sullivan and Willie Parker Stevenson; and her brothers, Junius M. Stevenson and Sullivan L. Stevenson.

To order memorial trees or send flowers to the family in memory of Willie S. Glanton, please visit our flower store.
Send a Sympathy Card