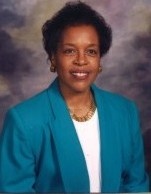 Mary Gold Bowman,    was  born July 15, 1939, to Tolay Brown and Pinkie Bell Hopson Brown, in Lauderdale County, MS. She was the fourth of six children. Her intended name was to be “Marigold”, like the flower. The mid-wife submitted the birth name in Spanish as Maria Golda which translates to English as first name: Mary, middle name: Gold.  Mary was educated in Porterville, MS and Chattanooga, TN schools.

She moved with her family from Lauderdale to several different towns in Mississippi, before moving to Chattanooga, TN, where she was introduced to a “Joe Louis”.  They began to date.  After a while Mary ended the relationship and moved to Fort Dodge, Iowa to live with her mother, Pinkie Bell.  A short time later, to her surprise, Joe moved to Fort Dodge and the two reunited.  In December of 1960 they were joined in marriage.  They were blessed with a total of five children, four boys and one girl: Jerry, Kathy, Richard, Tommy, and Steven.  Mary was always active in the church, so she joined Second Baptist Church. While there, she wore many hats, serving wherever needed.  Besides being a homemaker, her main occupation was as a nurses’ aide.

Mary became a widow early in life when she lost her husband, Joe, to a fatal car accident in 1974.  He was only 35 years old.  The following year, Mary moved her family to Des Moines, IA.

She loved working in the yard, gardening, fishing, fixing things around the house, and shopping.  While in Des Moines, she was a member of Progressive Baptist Church, then Corinthian Baptist Church, where she has been a member for 28 years.  Mary was called to be an evangelist at an early age but accepted her call later in her adult life.  During her membership at Corinthian she served as Associate minister, Mission President, Coordinator of Angel Tree Prison Fellowship and Angel Food Ministry, Deaconess Board member, church school teacher, including New Members and Vacation Bible School, Busy Bee, choir member and soloist (she sang tenor and alto).  She spent hours studying the Bible on her own time, and took various Bible courses, for which she received certificates of completion.

Mary departed this life on Thursday, May 3, 2018, at the University of Iowa Hospitals, surrounded by her children.  She was preceded in death by her husband, Joe Louis Bowman; her parents, Tolay and Pinkie Bell Brown; brother, Obie D. Brown; sisters, Zula M. (Smitty) Thedford and Annie Brown.

To order memorial trees or send flowers to the family in memory of Rev. Mary Bowman, please visit our flower store.
Send a Sympathy Card