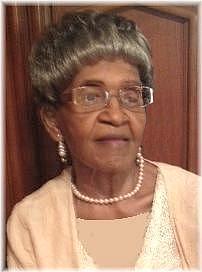 Rebecca Lou (Nipper) King was born on June 17, 1925, in Paris, Missouri to the late Everett and Daisy (Kipper) Nipper.  Rebecca graduated from East High School in June 1943, and married the man of her dreams, the late Robert L. King, Sr., on October 31, 1946.  During their 62 year union they had four children; Debora L. Kipper (deceased), Diana King-Williams, Atlanta, Georgia, Denise King-Miller, Washington, DC, and Robert L. King, Jr., of Des Moines, Iowa.
Rebecca, affectionately known as Becky, was a devoted wife and mother.  Since 1950 she was an active member of St. Paul AME Church where she served as a Class Leader, President of the Usher Board, worked in the Church kitchen, and helped to feed the hungry. Becky was also a dedicated Communion Assistant and a Class Leader.
Rebecca enjoyed reading the Bible and daily devotionals; she also loved listening to gospel music by artists such as Mahalia Jackson, Shirley Caesar and Yolanda Adams.  Her favorite musicians and songs from the Bebop era included Erskine Hawkins, “After Hours,” Nat King Cole’s, “Straighten Up and Fly Right”; Billie Holiday’s, “God Bless the Child,” and Duke Ellington’s “It Don’t Mean a Thing,” to name a few.  Her favorite television show was Steve Harvey’s Family Feud and her favorite movies were anything produced by Tyler Perry.
Rebecca died peacefully at her home on January 2, 2018. Becky is survived by two daughters and a son; Diana King-Williams of Atlanta, GA; Reverend Dr. Denise King-Miller (E. Ethelbert Miller) of Washington, DC; and Sergeant Robert L. King, Jr. (Billie Pinegar-King) of Des Moines, Iowa.  Also included are five grandchildren, Jasmine- Simone Morgan, (Christopher Morgan) of Washington, DC; Nyere-Gibran Miller, (Brittney Miller) of Lansdale, PA; Shanelle King of Houston, Texas; Bria King, and Austin Pinegar-King, both of Des Moines, Iowa; one great grandson, Matthew Christopher Morgan, of Washington, DC, and a host of beloved family, God-children and friends.
Becky had a big heart and was loved by many. She enjoyed talking on the telephone to friends, near and far. She will be dearly missed but her memory and loving spirit shall be cherished by the lives she touched.

To order memorial trees or send flowers to the family in memory of Rebecca Lou King, please visit our flower store.
Send a Sympathy Card