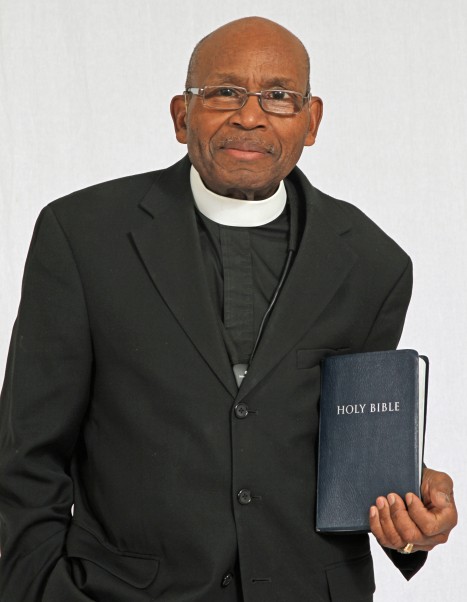 Pastor Superintendent Dr. James E. P. McNear, Sr. was born to the union of Larney and Julia McNear October 8, 1932 in Yarbro, Arkansas.  He was one of thirteen children and they grew up farming cash crops in Hermondale, Missouri. “Prince,” as his family affectionately called him grew up and matriculated through schools and graduated from Hayti High School in 1941.

After High School, Pastor James was drafted to the Army and served his country as a conscientious objector. In fact, in honoring life and refusing to take another’s life, he served as a medic in the Korean War and walked his guard duty without a firearm.  One of his most inspiring stories was the night he received the “baptism of the Holy Ghost” outside of his tent.

Upon completion of his tour of duty, he returned to the United States and settled in Kansas City, Missouri where he found employment at a candy store. It was there, in Kansas City at a church service, that he met and fell in love with a saved and sanctified young lady named Florence Doris Campbell. James married the love of his life in Des Moines, Iowa on June 14,1958. To their union were born four children: James Edward Preston, Jr., Julie Lorraine, Kevin Dean, and Karen Laverne. He was a loving father and a great man of God both inside and outside the home.

It is no secret that Pastor McNear was an anointed preacher of the gospel. Over five decades he pastored several churches including Faith Temple COGIC in Perry, IA, which was started in the basement and later moved to a newly constructed building. He pastored Faith Temple simultaneously alongside Mission Temple COGIC after the purchase and remodel of its location on 1161 Enos Ave in Des Moines, IA under the late Bishop E.A Tindrell.  God then gave him vision to lead the Mission Temple congregation to a dusty plot on 5th Avenue on a hot August day in 1985. The new Mission Temple Church building was constructed in 1986 and to the glory of God the congregation burned the mortgage in 1988.

Aside from leading the aforementioned congregations, Pastor James can be credited with the development and mentorship of many pastors and ministries amongst the Iowa Church community as well as churches around the country. This is just a glimpse of the power and anointing placed on this man’s life, and his willingness to share and impart God-given wisdom to other kingdom minded people. Just as a side note he accomplished all of the aforementioned things while working full-time for the U.S. Postal Service! (35 years total).

He loved the people of God and absolutely loved cooking for them. His Thanksgiving 6:00 A.M. Prayer Breakfasts with his patented “Salisbury steak, gravy, eggs and biscuits” were legendary!

Pastor loved to make Super 8 movies and produced such feature films as, “Christmas and the Little People”, and “David and Goliath”. All of these films featured costumes, scenery, and scripts, which he inspired. His signature introductions and closing of the films (letters moving around, and “claymation animation” type movement were ahead of their time.

He loved plays and pageants at Christmas and Easter, and wanted them written, rehearsed, and performed by the children. This tradition continues even today! Pastor loved the youth and it was not a strange occurrence to see him down on the floor on youth night playing games and working on projects.

Superintendent McNear also loved music! He taught a group of young boys called, “The Mission Temple Boys,” to play guitar for our church services and around the entire state. He was so gifted, talented and anointed that, he could play guitar for himself while he was preaching. He did until the Mission Temple boys learned to play well enough to carry the services and until his daughter Julie could play that Hammond organ!

Both Pastor James and his wife Missionary Doris McNear have always sought out ways to serve not only their home and church, but also their community. He later answered the call to the pastoral summit in Washington D.C. during the Reagan administration.

Founded in 1998, The Mission Temple Academy was prayerfully purposed to educate and motivate students and their families in the Des Moines inner city towards educational excellence. He worked alongside First Lady McNear in this new educational venture, conducting daily chapel devotion and teaching foreign languages (Korean & Japanese).

Pastor McNear continued to strive for ministerial excellence. He pursued his theological studies, encompassing nine years of study, through the Kenneth Hagin Bible Institute culminating with a conferred Doctorate of Divinity Degree from Green Memorial Biblical University in Sikeston, Missouri in 2004. If one expected to engage in a biblical conversation with Pastor James, he or she could expect thorough, spirit led and spiritually informed responses from him.

God imparted yet another vision to Pastor James and First Lady McNear and made provision to build once again. In 2008 the FBC (Florence Beatrice Campbell) Math & Science Academy was completed with its first student body to be served in 2010. The focus of the school was to motivate students to pursue careers in Math and the Sciences. At the institute, Pastor McNear continued to teach the chapel component daily to the students, along with the Korean, Japanese, and Latin languages.