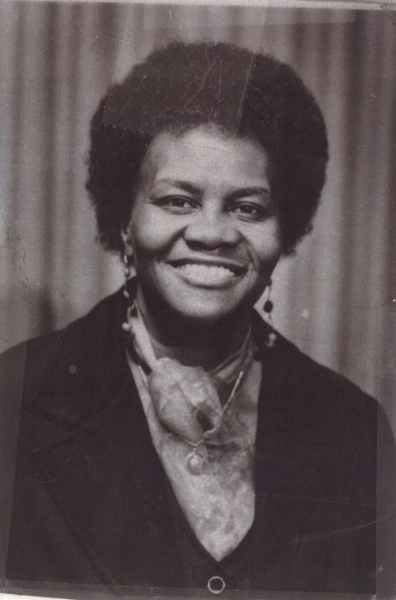 Doris Crystal Peavy was born to Alpha Omega (Thomas) and Isaiah Davis Jones on May 29, 1926, in  Pershing, IA She was raised and educated in Des Moines, graduating from East High. Following her primary education, Doris went on to attend Drake University and became the first black woman to graduate from that institution with Masters degrees in Sociology and Business. During that time, Doris pledged Delta and became a lifelong  member. She was also a lifetime member of Mt. Olive Baptist Church,  serving on the Mothers Board.

She was united in marriage to Leonard James Peavy Sr. and to that union, four children were born; Leonard, Suzanne, Saundra and Taunya.

During her working years, Doris became the secretary of the Nurses Union, Counselor at the Government Comprehensive Employment program and was an Employment Specialist for Iowa Public Television. Doris also was the      president of the Buxton, Iowa Club, becoming nationally known as the   guardian of Buxton’s history and artifacts. She would host presentations at the Forest Avenue library, DMACC’s Urban Campus, and State Historical building. Her final presentation was held at Learning of the Lord Revival Ministries C.O.G.I.C.

Mother Peavy was a strong force in our community. When Larry Milton was brutally beaten by the police, Mother Peavy led the protest of hundreds of citizens at City Hall. Doris was also a founding board member of KUCB 89.3, which served the community for many years providing gospel music and    programming over the weekends, as well as historically significant talk shows.

Left to cherish her memory are her children, Suzanne Holmes, Saundra Peavy, Taunya Howe; grandson, Darrell Peavy as well as 13 other  grandchildren, 28 great-grandchildren and 9 great-great-grandchildren, nieces, Lois (Michael) Edwards, Phyllis (Bradley) Voss and a host of extended family and friends.

To order memorial trees or send flowers to the family in memory of Mother Doris Crystal Peavy, please visit our flower store.
Send a Sympathy Card