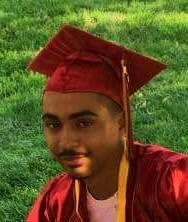 Markel Jabree Buford was born on July 17, 2000 to Janyshya Tolson and Michael Buford, in Des Moines, IA.  He was educated in the Des Moines Public School District and graduated from Lincoln High School.  While at Lincoln, Markel was a member of the soccer and wrestling teams.  After graduating, Markel continued his education at Northwest Missouri State University where he studied general education.

At a young age Markel developed a love for music and did not discriminate.  From rap to old school R& B to alternative, he listened to it all.  His love for music led him to DJ whenever the opportunity presented itself.  Markel also enjoyed cooking and playing video games. Above all, he enjoyed spending time with his family.  For Markel it was always “family first” and everyone knew it.  Markel’s loving and kind spirit will surely be missed and he was always sure to be a gentlemen with the ladies.

On September 10, 2019 Markel made his transition from time to eternity.  He was preceded in death by his grandfather, Phillip Mozee; and aunts, Tyanne Duncan and De’Ondra Ashby.

To order memorial trees or send flowers to the family in memory of Markel Jabree Buford, please visit our flower store.
Send a Sympathy Card