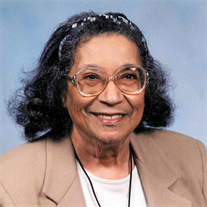 Marjory Ann Little was born August 2, 1923 to William David Polk and Daisy Moss Polk in Hutchinson, KS. She completed her primary education in Hutchison where she graduated High School in 1941.
Marjory furthered her education at the University of Kansas, attaining her BA in Education. Her love for learning led her to Des Moines where she completed requirements for her Masters degree at Drake University. Marjory became a well known and respected Teacher in the Des Moines Public School system. She taught Title 1 reading for King, Logan, Willard and Sabin schools before retiring in 1990, with over 35 years of service. Education was important and learning was life itself. She was passionate about her craft and set a standard of excellence for her students and her own children; D's were not allowed at her house!
Marjory (and yes, its spelled with a 'Y') initially joined Bethel AME church but lately spent her free time as a Sunday school teacher at First Federated Church. She also enjoyed sewing, gardening and shopping. She loved spending time with her grandchildren and reading. She was a good cook, but an even better baker, specializing in desserts. Marjory had a wonderful sense of humor, but she didn't put up with nonsense. She could quickly let you know if you weren't acting right.
Marjory passed away August 23, 2016 at the age of 93. She was preceded in death by her beloved husband, Levell and her daughter, Vickie. She was also preceded in death by her parents and brother Charles.
Left to cherish Marjory's memory are her sons, William Little, Sr. and Michael Little; her grandchildren, Billy Little ,Jr, Monique Johnson, Katy Wells, Tamika Wells, Brandy Kelly, Imeri Little; 7 great grandchildren and 1 great-great granddaughter, along with a host of extended family and friends.

Visitation prior to service

To order memorial trees or send flowers to the family in memory of Marjory A Little, please visit our flower store.
Send a Sympathy Card