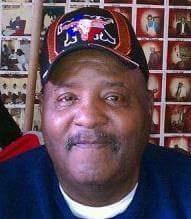 The Celebration of Sonny's life will be held at 12 noon, Monday September 9th, 2019 at Elim Christian Fellowship with visitation two hours prior to the service.

LaVerne “Sonny” Greenfield Sr. was born on July 9, 1939 to Gladys (Taylor) and Robert Greenfield Sr., in Des Moines, IA.  He was educated in the Des Moines Public School District and graduated from North High School. While at North, Sonny was a stand out athlete  lettering multiple times in wrestling and track.

After graduating from high school Sonny entered the workforce. He worked several jobs throughout his lifetime and spent the majority of his career at Armstrong Tire Company. Sonny’s tireless work ethic earned him a promotion to Tire Builder Supervisor, the position he held until his retirement.

While in his 20’s, Sonny went out to socialize for the evening.  An attractive young woman caught his attention.  Her name was Linda and he was smitten at first sight.  He could not have predicted that on that day he would meet the love of his life.  The two became one and they shared love and life together until Sonny’s passing.

Sonny’s favorite past times included fishing, bowling and teaching the children how to play blackjack.  His love for wresting continued throughout his life.  Even his children managed wrestling teams.  He was filled with excitement every time they would compete.  He also was a football fan and would watch his   Chicago Bears whenever he had the opportunity.  Sonny also had a knack for cooking.  His stew and meatloaf were family favorites. Sonny also had a thing for keeping the house clean, everything had to be in its proper place.   Above all, Sonny will be remembered for his generous heart. He was never content if someone he loved was in distress.

Sonny peacefully passed away on September 3, 2019, surrounded by his loving family.  He was welcomed on the other side by his parents, Robert Sr. and Gladys Greenfield; siblings, Robert Jr., Thaddeus, Donald, Jean, Odessa, Margaret, Marian, Willie Mae, Bonnie, Johnnetta, Alzada and Ida Mae.

To order memorial trees or send flowers to the family in memory of LaVerne "Sonny" Greenfield, Sr., please visit our flower store.
Send a Sympathy Card