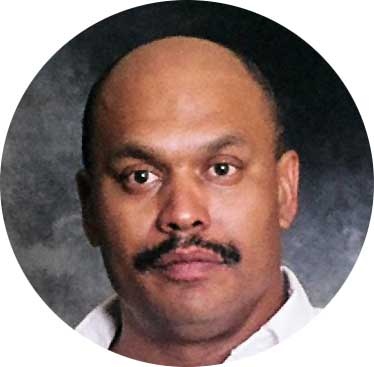 Keith Leroy Kaiser, of Woodbridge, Virginia, passed away unexpectedly on March 16, while in the company of some of his closest friends.  He was 59.

Keith was born and raised in Des Moines, Iowa, the 5th child of Carl and Sylvia Kaiser.  He weighed less than five pounds at birth, but by age 18, he stood 6’ 3” and was a track star at Des Moines Technical High School.

As a young man, Keith placed all his worldly possessions into a tiny Honda Civic, and headed East.  He met his future wife, Candi, while they were both living in Washington, D.C.  Following their marriage, they bought a home in Woodbridge, Virginia, where they had two children, Keana and Keith, Jr.

Keith flourished in Woodbridge.  He cherished his children, and to ensure they always had food on the table, he worked full-time for UPS, and he also established his own company, contracting with developers to clean newly-constructed homes.

Keith was a steadfast friend and a good and decent man.  He had the gift of gab and could tell a story so well, you thought you were there.  He was highly intelligent, relaxed about life and not materialistic in the least.  Keith loved to travel to the Caribbean, Puerto Rico and Brazil, and, in June, he and his father had plans to attend an NCAA track meet in Eugene, Oregon.

Early in his life, while living briefly in Ventura County, California, Keith began a passionate 40-year love affair with motorcycles.  His favorite rides were in the Los Angeles area of Mulholland Canyon.

Any avid motorcyclist can tell you there are times when you are riding down a two-lane blacktop and it seems like the road will go on forever.  But it doesn’t.  Keith reached the highway’s end far too early in life, and he will never attend that last track meet with his father.  But in the nights to come, when his father hears a distant deep and lonely rumble on the highway, he will think of his son, and he will remember him as a fine and noble man, a man who did well for his family, a man who was a true friend to the world.

To order memorial trees or send flowers to the family in memory of Keith L. Kaiser, please visit our flower store.
Send a Sympathy Card