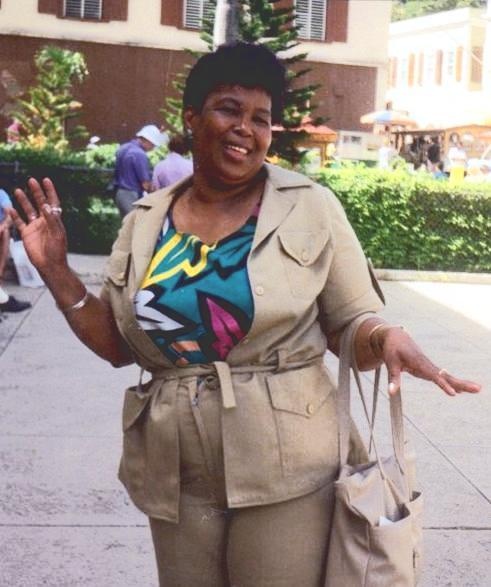 Jean was a long- time resident of Chicago, Illinois from March 10, 1963, when the Ferguson family, including her former husband, George E. Ferguson, and their four sons immigrated to the United States.  Before leaving British Guiana, Jean graduated from Saint Phillips Anglican School, with a “School Leaving Certificate”, an academic qualification awarded for completing primary school in British Guiana. After immigrating to the United States Jean obtained her High School Diploma by passing the General Education Development (GED) tests.  Subsequently, Jean worked as a Nurse’s Aide at Bethany Memorial Hospital (the hospital that sponsored immigration of our family to the US) and Mount Sinai Hospital, where she advanced in the hospital’s Central Services Department, ultimately becoming a supervisor in the department for the 3:00 p.m. to 11:00 p.m. shift. Jean retired from Mount Sinai Hospital in 2002.

Jean was dedicated to the success of her family and for as long as her sons could remember, she worked two jobs, a fulltime and a part time job. Mount Sinai Hospital was her full time night job, and her initial part time job was with a Cleaners. Through her good friend Rita Benn, Jean entered the home nursing services field and remained in that field until shortly after her retirement from Mount Sinai Hospital.  The Medical Personnel Pool, a National Nursing Service, paid tribute to the quality of Jean’s work by sending her the letter below:

We have received a complimentary evaluation of your work and would like to thank you for upholding our high standard of nursing care.

We’re proud of you, Jean, and want you to know it.

The tribute epitomized Jean’s dedication and commitment to excellence and her dedication to her four children, that’s the reason she worked two jobs.  Jean was an exceptional seamstress, a skill she learned from her mother Mildred Beatrice Claxton Nelson. When she had an important event to attend, Jean sewed many of her clothes which were of better quality than those sold in many clothing stores. She taught her boys her sewing and cooking skills. What a mother!!

Jean attended their sporting competitions, often, they all knew, she could not remain until the end of their games.  They played their hardest when she was there, knowing she would be leaving for work soon. They always knew where Jean sat in the stands and, so when they looked up and saw an empty space where she sat, they knew Jean had left for work.

After Jean retired, she continued to live in Chicago near her 4th son Collin Ferguson and his spouse Danielle and their family. Jean than lived with her oldest son Kenneth, spouse Vanessa and their family in Overland Park, Kansas for two years before moving to Rockingham, North Carolina to live with her 3rd son George Ferguson, spouse Roxanne and their family.  Jean then moved to Des Moines Iowa in 2008, where she first entered a nursing home.  Her 2nd son Phillip Ferguson, spouse Anita and their family, faithfully visited her almost daily. You would have thought Jean was on Phillip’s track team, because he put her through workouts at least three days weekly. She loved Phillip’s workout so much that sometimes, when Jean saw him entering her room, she would pretend to be asleep, hoping he would go away.  It didn’t work, Phillip took her through her workouts. Phillip was not selfish, when the brothers came to visit Jean, he introduced us to the workout regime and they had to take his place leading the workouts for the time we were there.  Jean loved the attention and we loved being with her. Jean moved to The Bridges at Ankeny in 2016, where she remained until she went on to glory, to be with her Lord and savior Jesus Christ.

To order memorial trees or send flowers to the family in memory of Jean "Kitty" Ferguson, please visit our flower store.
Send a Sympathy Card