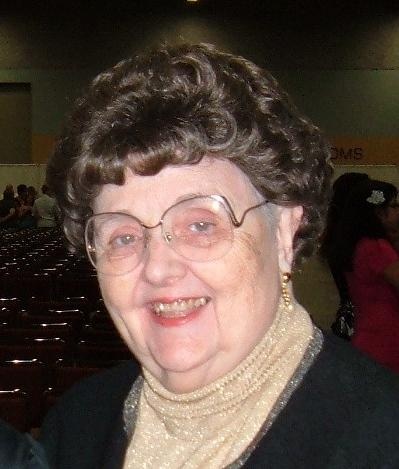 Jean Joy Babcock was born to Charles Joy and Sarah Shipley on July 20, 1929, in the Lake City, Iowa. She was raised and educated in the area, graduating from the Lake City school system.

Later in life, Jean met Cleon Babcock. The two were united in marriage and together, they made their home in Creston, Iowa, to raise their  family. To that union, they were blessed with a son, Jeffrey Wayne Babcock. They would eventually relocate to Des Moines, Iowa.

At the age of 40 years young, Jean decided to go to college. Cleon   remembers the conversation well: “We had an agreement; if she stayed on the dean’s list, I would keep the dishes clean. We kept our           arrangement.“  Jean started school at Grandview and continued her studies by graduating from Drake University with her teachers          certificate. Jean began working in the Des Moines public school       system.   After 10 years of faithful service, Jean retired from teaching and took a job at Kelly Services; a professional temp service. During her time there, Jean received an award for employee of the year.

Jean also ran for the house of representatives (during the Goldwater years) and received more votes than any republican at that time, before or since. The family remembers going door-knocking with Jean and  Jeffrey during her campaign.

Jean loved to play the Dulcimer, and transcribing the music she learned into a special book. She was a member of the Rock and Mineral society and Toastmasters International. Jean also found she loved writing      by-laws for organizations  both local, and state-wide. But more than  anything, Jean loved spending time with her family.

Jean passed away November 8, 2018. She was preceded in death by her parents, Charles and Sarah Joy; her siblings, Edna Burger, Muriel Pierce and Eva Patterson.

To order memorial trees or send flowers to the family in memory of Jean Babcock, please visit our flower store.
Send a Sympathy Card