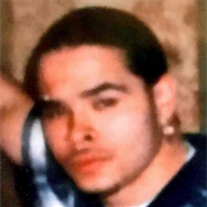 James, affectionately known as Tuffy, was a talented artist. He could draw anything! He also was self taught auto body repair specialist. He also enjoyed spending time with family and close friends.

James passed away on July 21, 2016. He was preceded in death by his aunt, Beverly Tiesman and cousin, Dameria James Tiesman.

To order memorial trees or send flowers to the family in memory of James Patton, please visit our flower store.
Send a Sympathy Card