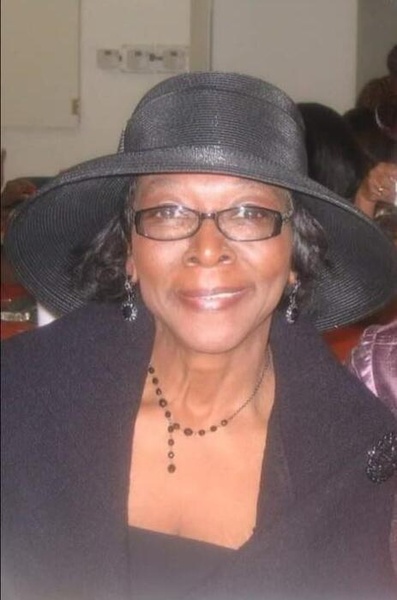 *CDC guidelines will be followed with masks required during the Visitation Homegoing Celebration.  Social Distancing will strongly be encouraged.

Born October 8, 1945, in the city of Des Moines Iowa, to the late John Henry and Mae “Mary” Ethel Martin. Pearl was born with a calling and victorious destiny known only to God. She is a story that is solid proof of Jeremiah 29:11, “For I know the thoughts that I think toward you, saith the LORD, thoughts of peace, and not evil, to give you an expected end.”

Pearl’s school days were spent in the Des Moines Public School System, graduating from East High School in the Summer 1963. At East High, the vibrant, bodacious, personable, and energetic Pearl attention was drawn toward the music department, becoming the first African American woman in the East High School Drill Team, as well as Competing in the 100 Yard Dash at Drake University (among college students), where she came in second place running against United States World record-holding Olympic champion the late Wilma Rudolph.

Growing up in a religious household, Pearl accepted Christ at an early age and was an active and faithful member of the New Jerusalem C.O.G.I.C. under the leadership of the late Bishop M.W. Goodman, where she served in many areas of the ministry. Pearl was the Sunday School secretary, Testimonial Worship Leader, but her true calling was singing and directing the choir. Pearl used her singing ministry to not only glorify God, but to minister to the broken-hearted and those who were lost.

As teenagers, Pearl and Sam Johnson were the first to organize a youth gospel choir in the entire state of Iowa. Youth and young adults from near and far, running to be a part of this anointed ministry. Later, Pearl was appointed by the late Bishop Hurly Bassett, State Minister of Music. For nearly 13 years, Pearl used this platform to travel all over the city and state coordinating workshops, voice training and evangelizing to God’s people through song.

In the year of 1963, Pearl met the young Andrew E. Johnson, who also attended New Jerusalem along with his family. The two courted and with God blessings from her parents, the young Andrew and Pearl were married on April 13, 1964. The attractive young couple embark upon what would be nearly 57 covenant-keeping years that became one of the strongest hallmarks of her life and to this union, five children were born; one son, baby Edgar preceded her in death.

Mother “J” was very instrumental in inviting musical greats, such as the late Dr. Mattie Moss Clark and her daughter, Elbernita “Twinkie” Clark, who would come and conduct musical workshops which became an annual invitation. In addition, other musical greats such as the late O’Neal Twins, the late Samuel Murrell and the late Reverend James Moore, just to name a few who would come and bless in song and music. Mother “J” was appointed by Dr. Mattie Moss Clark to become a board member of the Church of God In Christ Music Department on a National level.

“But without faith, it is impossible to please him: for he that cometh to God must believe that he is, and that he is a rewarder of them that diligently seek him.” Hebrews 11:6

God have a different plan for Mother “J’s” life, after serving as First Lady of South East 28th Street C.O.G.I.C. and New Bethany C.O.G.I.C.; in 1986, the family moved to California, after hearing the voice of the Holy Spirit telling them both, there work in Des Moines was finished. Mother “J” strived to demonstrate throughout her life a sincere obedience to God and whenever there was an opportunity to teach the Word, she would with no hesitation or reservation. When it came to spreading the Gospel of Jesus Christ, nobody was exempt.

Mother “J” was a very independent person who could perform any tasks given to her without complaint. Her work ethics were impeccable, and she taught her family to follow her example.  She worked various jobs after retiring from Purex Pool Systems. She started her own daycare service, worked for Homestead Senior Care Center and was owner and operator of PJ’s Fashions; where she made clothes for not only her family, but established a clientele. Anything Mother “J” pursued, she did it with finesse and with love.

Mother “J” was a reverent woman who loved the Lord, a loyal and faithful wife to her husband; a devoted mother to her children and grandmother and respected by her family. Family was everything to her and she did not take it for granted. She was a confident counselor and closest of friends, a person who was always available to share an encouraging word and demonstrated strong support. Mother “J” believed, “no matter what your trials are, or how big your mountains seem; The Lord is there to see you through; He’ll go to all extremes. So, if your cross seems too hard to bear, and you know not what to do; the one who loves you most of all will be there to see you through.”

Mother “J” was full of joy, laughter, and loved having a good time; especially during family gatherings where she would cook a feast; while listening to her favorite gospel jams; and often she would give you a couple of dance moves. She enjoyed shopping at various malls and outlets.

“In every life, rain must fall, but trouble don’t last always.

Don’t give up, joy will come in the morning.”

On Monday, February 8, 2021, Mother “J” entered a new life, free from pain and disappointments. Mother “J” was received into the gates of Heaven, by her parents and her siblings Paul Sr., Louis Sr., Charles, Sonny, James, Inez, Geneva, Maxine, Ruth, Vivian, and Glenda.