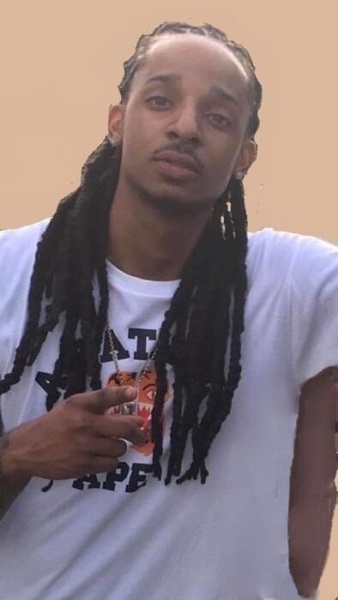 A Gift from God – Manly & Courageous

Heaven Blessed us with an Angel

On May 14, 1993 in Des Moines, Iowa, a precious gift (Derek Andrew Simpson Carr) entered the world at 8:37 a.m. at Mercy Hospital as the first fraternal twin son, born to parents Bates and Debra A. Simpson Carr. Derek recently celebrated his twenty-seventh (27th) birthday surrounded by his loving bonus brothers and close friends. He gained his heavenly wings on June 2, 2020 at 2:36 p.m. – taking flight from North Dallas, TX. Standing at the pearly gates of Heaven awaiting a joyous eternal reunion was his beloved “Granny,” Elizabeth Sistena McTizic Simpson, joined by her husband Sidney Simpson and grandparents – King Herod Carr & Barbara Jean Ramsey Carr. Derek accepted Jesus Christ as his personal Lord and Savior at an early age. The Carr Family were members of St. Paul A.M.E. and Shiloh Baptist in Plano, TX.

Derek was an inquisitive, happy child who learned to walk at the age of six months. He never took time to crawl, rather rolling around on the floor until he actually took his first steps “running,” across the room. The twins were a joy to watch how they interacted and communicated with one another. Lots of rich stories and memories of shear joy, laughter and love. The twins were also affectionately called – Skittles by their mom….

Derek spoke in full sentences at 15 months, always physically moving a bit faster for his age. He was acrobatic, athletic, flexible and enjoyed basketball, running, jumping and playing sports. His smile lit up a room. He had a head full of hair sometimes worn as a big bushy afro or maybe French-braided and later growing long locs. His hair become a signature statement of growth, strength and power. His style, swag and presence were easy to spot, even as a little toddler. He always had a way of “standing out,” rather than “fitting in.”

Derek and Darren were enrolled at Geneva Daye’s Childcare Center until they went to preschool. Their first formal academic experience began at the Early Enrichment Program at Homes of Oakridge. The twins attended all-day Kindergarten at King Elementary School.

Derek was a curious child and fearless. He sought viable ways to make meaning out of directives and had a deep quest for understanding the connection of commands to impact, benefits and for whom? While his gifting challenged teachers and systems, he stood true to his beliefs in becoming his true authentic self.

Derek and his twin-brother (Darren), lovingly called each other “brother,” years before they referred to one another by name. The twins’ vibrant personality caught the eyes of (6) national modeling agents. Derek and Darren were signed to modeling contracts for much of their early and middle childhood years.

Derek attended Merrill Middle School and graduated from Roosevelt High School in Des Moines, IA in 2011.  While at school, the twins gained a lot of popularity. They expanded deep close relationships with Timothy Evans, Dwight Sistrunk, Charleston Parham, Reed Mells, Voci Woods, and Cory McMillian, just to name a few. Joe Koger, Obie Obumseli, Deandre Calloway and Thomas Miller were just a few close friends who would go to weekly skating parties, play basketball, run track, or spend countless hours playing notorious video games. Good friends like Alex, Kelly, Anthony, Jazel were always supported as well. Whether they ran track for Track Iowa, played basketball with the All Iowa Attack, Y-Basketball League or played for the Kings Basketball Team, they stayed busy and engaged in many activities including a neighborhood youth mentoring, employment and financial wealth building series. Derek began his first job with McDonalds when he was (15) years old. He learned how to make and save money, a trait he held onto.

Derek’s athletic ability led him to earning a quarterback position for the Riders, until he was sidelined with an injury. Derek was a leading scorer for Merrill Middle School Basketball Team and received recognition as conference metro league basketball player in high school. He was a natural leader and skilled debater.  He encouraged everyone to push beyond boundaries, strive for excellence and do not accept mediocrity. Derek loved people and had a deep love for family and his bonus brothers and their families- Patricia Sterling & Family, and Godmother – Martha Wilder & Family and several others.

Derek moved to Texas with family and friends in 2011. Initially, his focus was on gaining residency in a new state. He attended Tyler Junior College and Collin College in Plano, TX where he enrolled in a certification program in Music Engineering (which he excelled). From there he began creating the life and conditions to begin building wealth, financial freedom and independence. Principals he deeply believed in.

He quickly gained employment as a Cashier/Customer Service Representative for Uhaul, and Ralph Lauren Polo Store at the Outlet Mall.  He became a rising top sales leader for Frontier Communications. Derek was part of a leadership team that trained an entire sales/customer service team helping representatives learn how to provide quality products and services for thousands of customers throughout America. Derek also worked for Liberty Mutual Company prior to stepping into entrepreneurship and incorporating his own business – Sharp Shooter Visuals, LLC. He was a successful business owner and earned great respect from his clients. Valued customers relied on him to produce and edit sharp videos for individuals, artists, and corporations. He was a highly sought-after self-taught editor and skilled photographer. He shot and edited professional images, capturing special moments such as graduations, senior photos, weddings, music and training events. Not to mention he loved performing his music on stage and with his friends. He spent time reading mind motivating books and playing videos too. Timothy, Dwight, Nicholas were always there and Charleston a call away.

THE MUSIC, THE MESSAGE, THE MAN

Derek’s love of music began in middle school, rapping every morning at the school breakfast table with Charleston Parham and Timothy Evans. Quickly gaining positive reaction from students, the three created their first rap group “Third Degree.” He loved writing lyrics and performing. He noticed early the struggles of being born Black and male In America. His first and later writings would be filled with intense expression. He worked with a network of producers that produced his beats - Hitz by Hurst being one of them. He supported and inspired many artists, including using his influence to support votes for Sharane Calister, finalist for television show – “The Voice.” Derek, Tim and Dwight would often be in the studio making music.

To order memorial trees or send flowers to the family in memory of Derek Andrew Simpson Carr, please visit our flower store.
Send a Sympathy Card