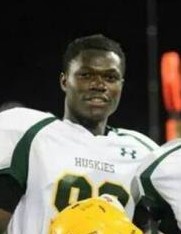 Augustine Kouh was born May 1, 1996 to the union of Pierre and Eliza Kouh in Ivory Coast, West Africa. After the death of his father, he was taken care of by his mother and step-father, Solomon Toe. The family immigrated to the United States in 2004, living first in Erie, PA and then moving to Iowa in 2006, for more job opportunities.

Augustine was educated in the Des Moines Public School system graduating from Hoover High School in 2015.  While in school Augustine participated in several sports. He was fond of football; but he excelled in basketball, where he earned many honors.  His favorite team was the LA Lakers.

Augustine was a Christian, baptized here at Zion Lutheran Church. He was a valued employee of A to Z Equipment  Rentals.  A fun loving person, Augustine was full of smiles. He loved to share jokes, play music and videos and hang out with his friends. Augustine was always concerned about his family and encouraged his siblings to strive for good grades to make a better life for themselves and to make their parents proud.

Augustine was taken from us on February 7, 2017. He was preceded in death by his father and paternal grandpa.

Augustine is survived by his parents, Solomon and Eliza Toe; his brothers, Josiah and Aaron; sisters, Evelyn, Mable and   Esthella, a host of  nieces and nephews; his maternal grandmother; best friend, Daniel Sundayboy and extended family in the Ivory Coast and Liberia.

May his soul rest in perfect peace!

To order memorial trees or send flowers to the family in memory of Augustine Kouh, please visit our flower store.
Send a Sympathy Card