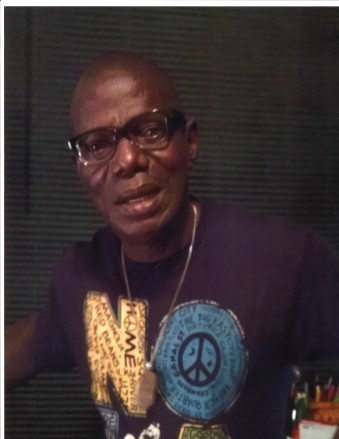 “I was born in the city of Zwedru, Grand Gedeh County, Liberia, West Africa.

I graduated in 1970 from Gboveh High School in the city of Gbarnga, Bong County. In 1980 I moved to the capital city of Monrovia and found a part time job as a laborer at the Freeport of Monrovia. I worked unloading and loading goods from a ship.

In 1986, I joined John Warner United Methodist Church and was baptized. Through the church, I found employment as a teacher for Kindergarten students.  I loved God. Wherever I moved I would find a church and attend on Sundays. I loved dressing in my African clothes with their bright colors.

On November 18, 1998, While on my way home from school, fighting broke out between the government forces and rebel forces. The bus I was riding on was stopped and everybody had to get off. There was fighting and shooting in every part of Monrovia. I lost track of my family, my wife and children. For two weeks, I could not leave my hiding place at a friends home. He would leave me in the house while he went out. He came back and reported there were dead bodies all over the streets. When the Taylor forces overtook the capital, most of my tribe - men, women and children, were killed or fled to the capital of neighboring countries, such as Sierra Leone, Ivory Coast and Guinea, etc.

I asked my friend to help me get to the Ivory Coast border. I also walked a week and a half to cross over  the border, but I was captured by soldiers from the Ivory Coast. After an interview at an UN office, they placed me at Peace Town Refugee Camp where I spent the next three years. In August of 2003, the UN took me to the capital Ivory Coast, Abidjan for a resettlement program. On December 1, 2003, I left Abidjan for the USA. Initially I arrived in New York and was placed  in Pasco, Washington.

In 2007, my beautiful daughter, Modesta, was born. ‘She is my life’. I worked hard to be able to care for her. In 2010, I returned to Des Moines, Iowa so that we both could have the support of my sister, Jessie Roberts and so many family and friends. I studied hard and was employed in the field of nursing. I was in the middle of the nursing program when I became ill. I worked as a care provider or CNA for several agencies in the Des Moines area.

To order memorial trees or send flowers to the family in memory of Alfred Gaye Cheyard, please visit our flower store.
Send a Sympathy Card